These are my characters for the animation project “Exu’s Cave” that I’m currently working on. 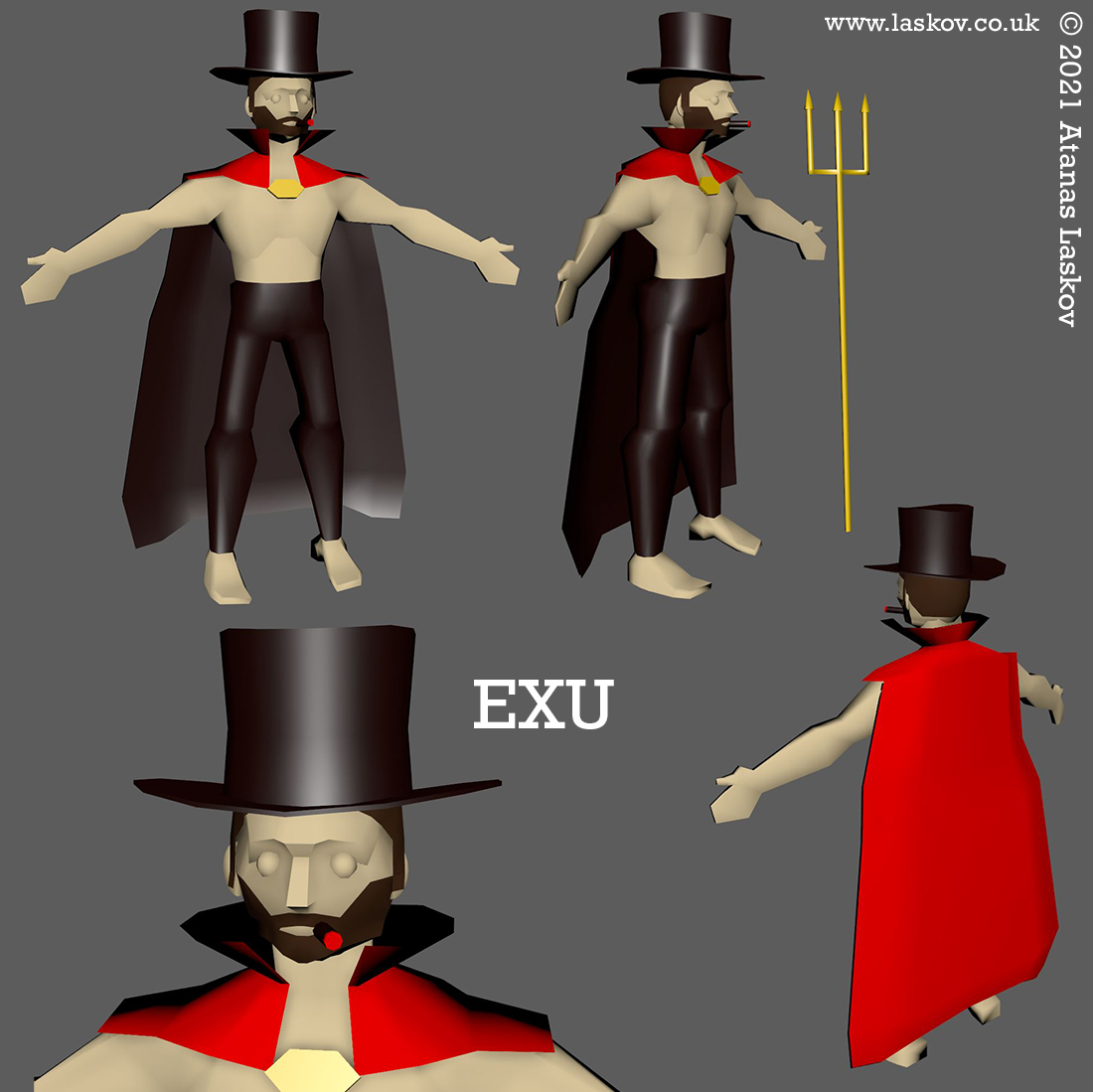 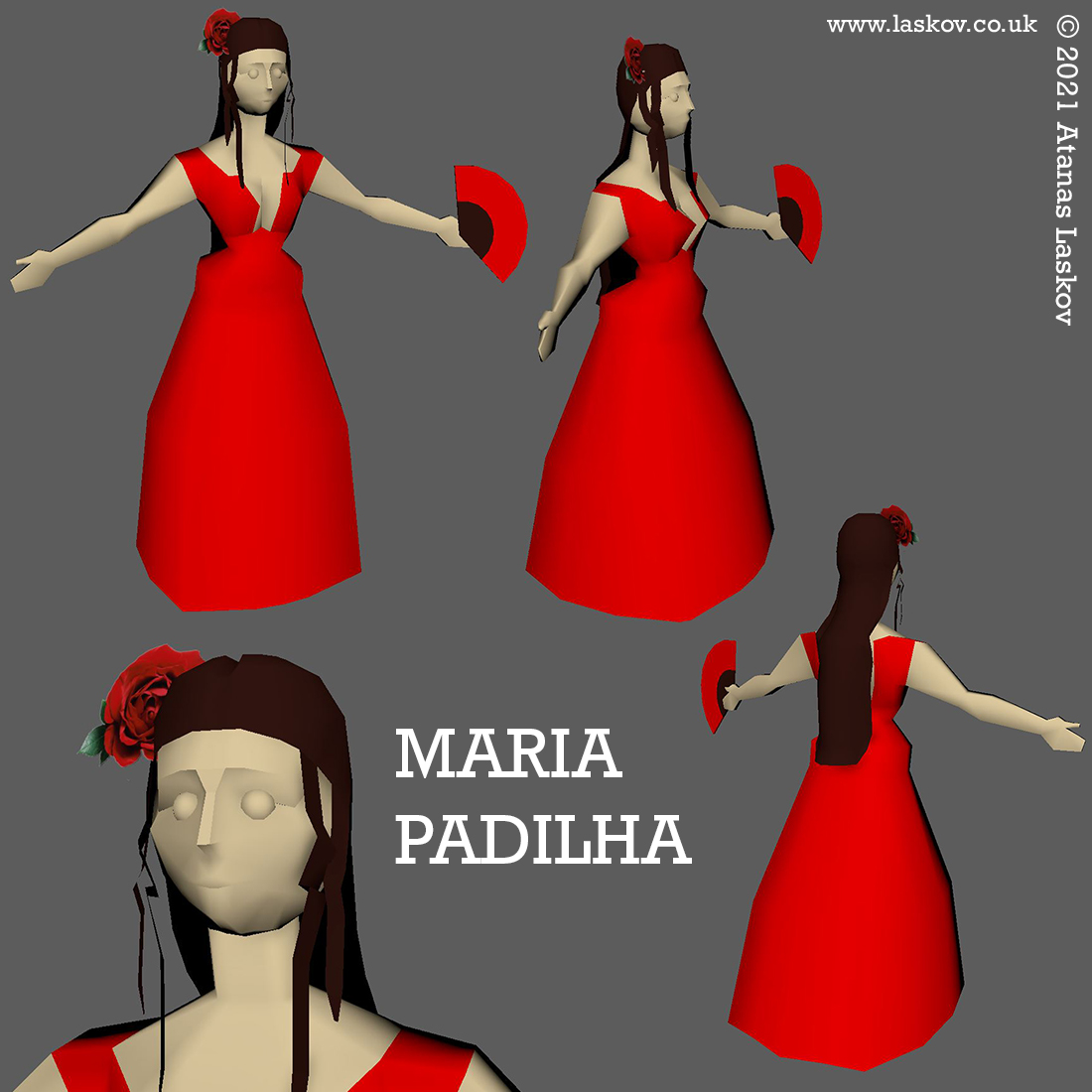 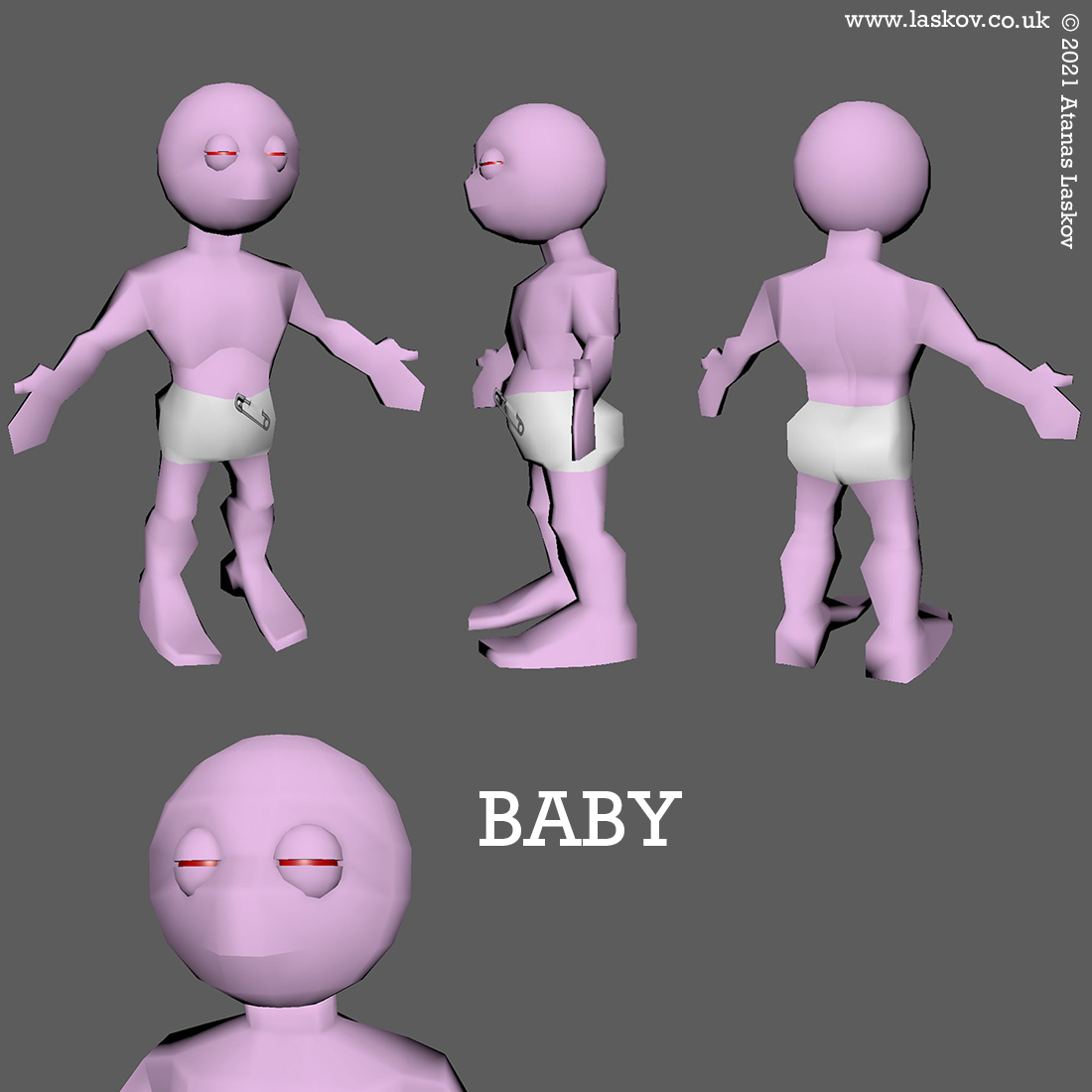 Also here a little boat that I modelled for the same project ;-). 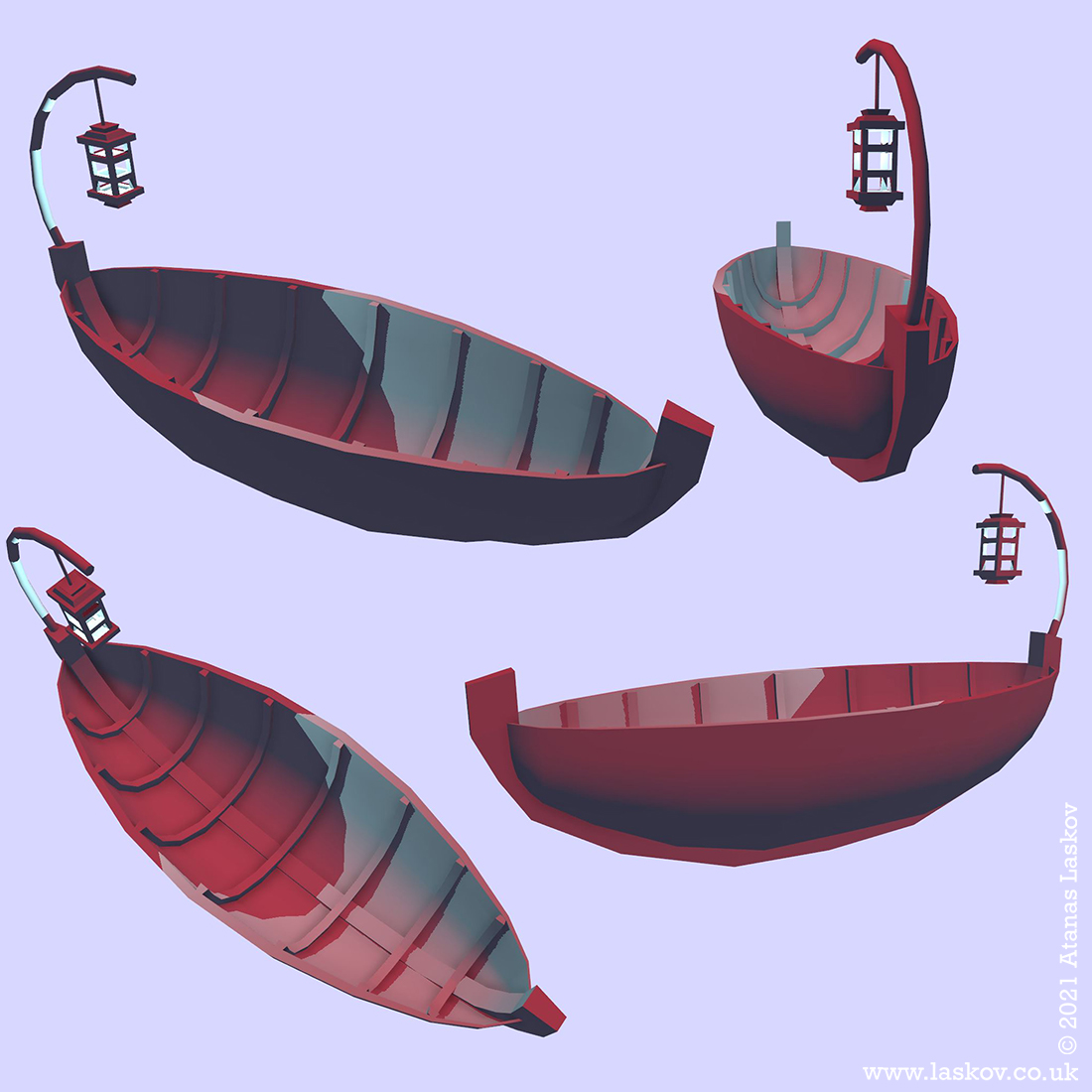 I used Photoshop and ArtRage for this painting of a Japanese tea-master. This is a summer ceremony, so she has the tools for this season: shallow tea bowl for the summer (Chawan 茶碗), summer teapot with brazier (Kama 釜 & Furo 風炉), cool water vessel (Yakan 薬缶), spare water vessel (Kensui 建水), and the tea powder box (Natsume 棗).

My objective was to depict the utensils accurately – like the bamboo tea scoop (Chashaku 茶杓) the ladle (Hishaku 柄杓), and the ladle stand (Futa-oki 蓋置). Their size is exaggerated a bit for stylistic effect.

Teahouses like this one were constructed “Wabi-Sabi”, in the rustic Zen style. The final illustration is available as high-quality print. 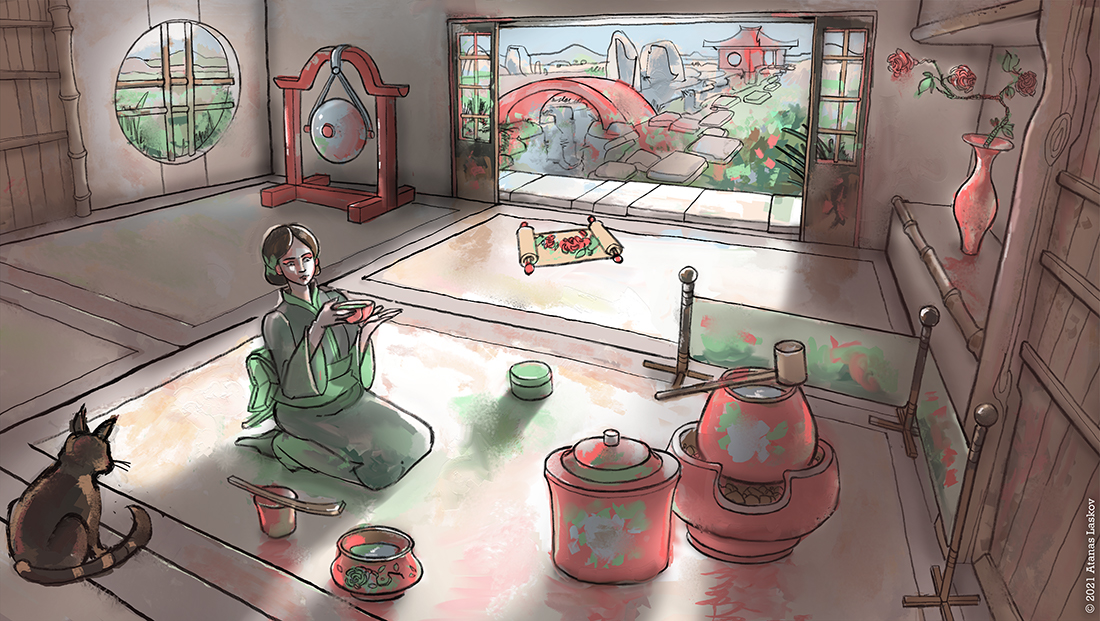 Here I’d like to reveals some of the process behind this illustration.

My colours were glazed on top of a black-and-white study. In the next picture you can see this “light pass” without the colours. I used fairly soft airbrush in Photoshop. The primary light source is the open sliding door, so light comes from the garden. The circular window in the top left is a secondary light source. This creates some glints on the gong. All the corners of the room are darkened by “ambient occlusion” which is a soft shadow that contributes to realism. 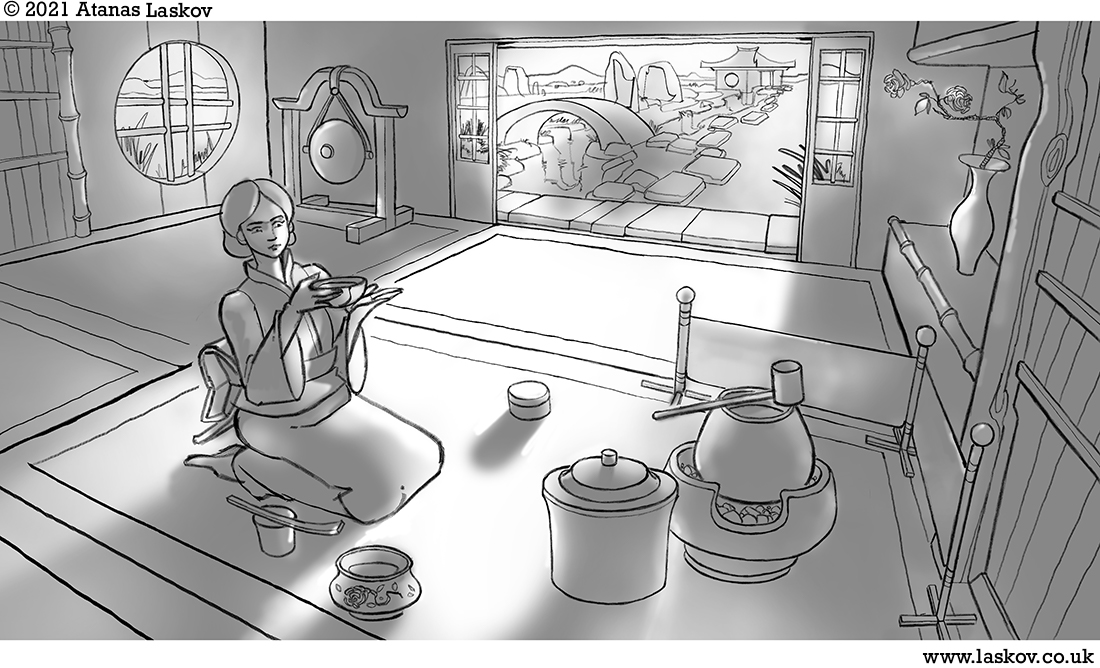 The previous step was just lines, without any light and colour. Deconstructing it down to the bones, you can see this below: 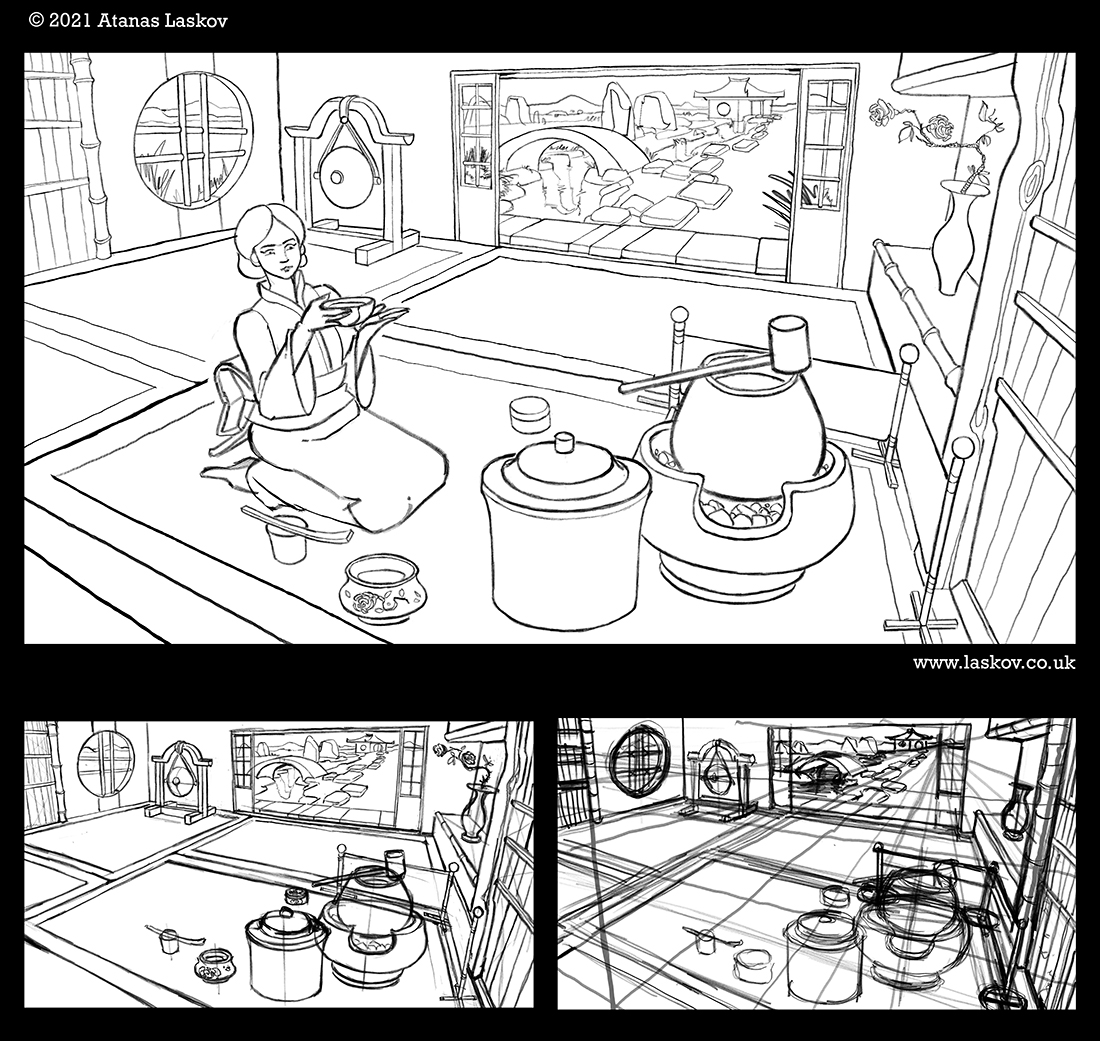 Of course it didn’t start so neat! Initially, the perspective sketch was very messy. But I had established where my vanishing points (VP) are on the horizon, and was projecting (hairy) lines from these VP to construct the environment.

Below you can see some initial thumbnails, the very beginning of my “brainstorming” for this illustration: 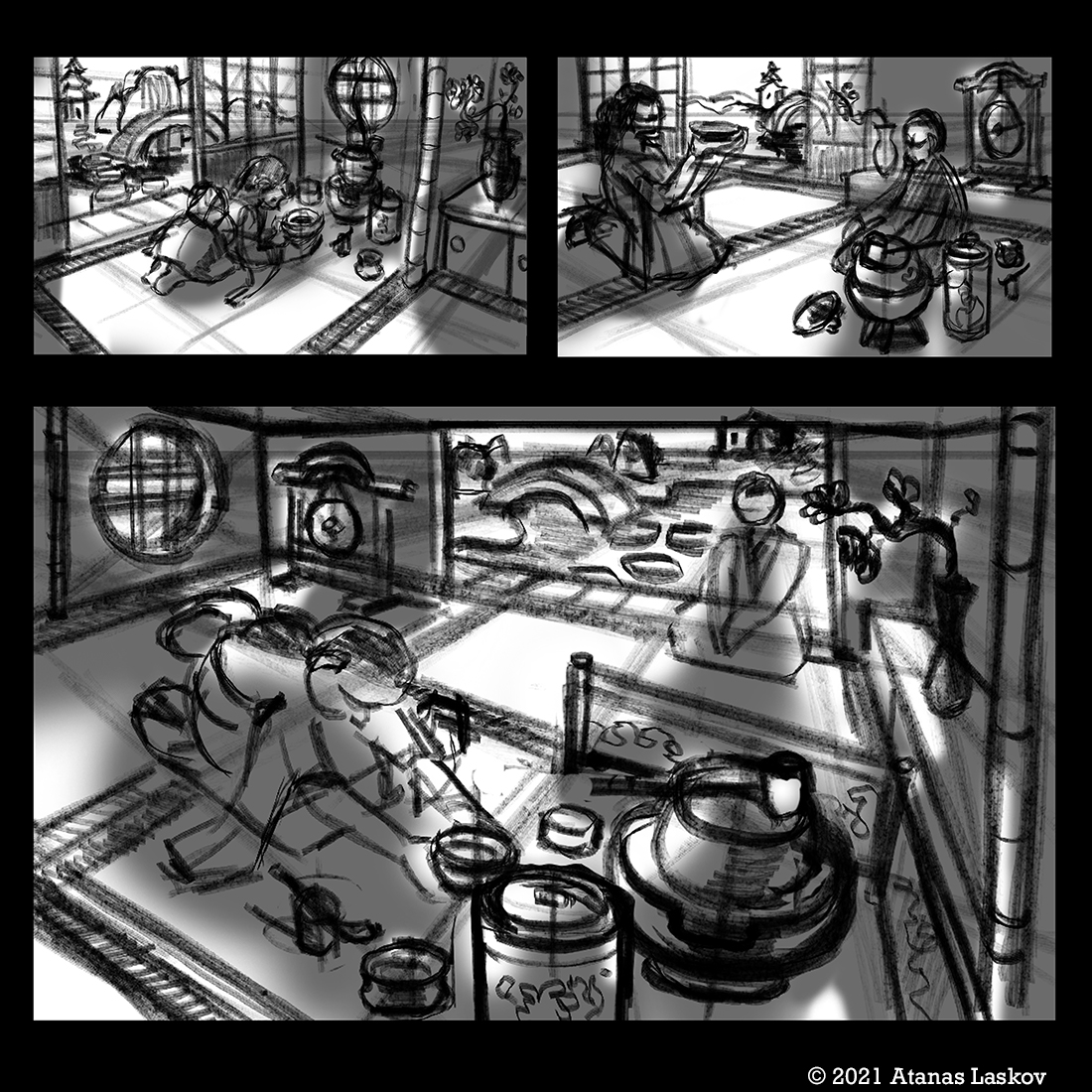 The interior space in Japanese teahouses follows a traditional patterns of architecture. I wanted to reproduce this with historical accuracy, like in my study below.

If you want to read more about the Japanese tea ceremony a great resource is this website.

Previously, I made another Japanese themed illustration of a Shinto gate. In the future plan to make more illustrations about themes like Zen, Shinto and the martial arts.

My personal style is influenced by Studio Ghibli; And another important influence for me is Berthe Morisot, one of the French impressionists. You can read more info about her in my post Studies After Morisot.

Here are some turn-around animations of the environments Exu’s Cave, Purgatory and Weeping Angel which I’ve been working on for my animation project.